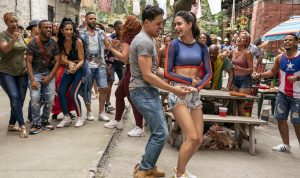 In The Heights raised an eyebrow for its lack of Afro-Latinx representation, and The Root journalist, Felice Leon, confronted the director and a few cast members about it.

Jon M. Chu admitted that it was something “I needed to be educated about.”

“In the end, when we were looking at the cast, we tried to get people who were best for those roles,” he continued, adding, “But I hear you on trying to fill those cast members with darker skin. I think that’s a really good conversation to have, something that we should all be talking about.”

Chu thought he was doing something by highlighting that the background dancers were black but Leon stood firm in her stance, making the Afro-Latinx bystanders proud.

The director responded, “I hope that encourages more people to tell more stories, and get out there and do it right then.”

Leslie Grace, who starred in the movie, spoke about how the lack of Afro-Latinx representation impacted her as a Dominican-American.

“I didn’t realize until making this movie that I didn’t really get to see myself or people that looked like my siblings, that are darker than me, onscreen,” she told Felice. “And I didn’t realize how much that affected the limitations that I put on myself—being someone who wanted to be an artist, an actress and even be in the Latin music industry being Afro-Latina.”

“I feel so blessed that we get to express the diversity that is within the Latinx community in a way that we haven’t been able to see onscreen,” she added. “I hope that this is cracking that glass ceiling. Because I do hope to see my brothers and sisters that are darker than me lead these movies.”

Another actress in the film, Melissa Barrera, revealed that many Afro-Latinxs auditioned for the role but coincidentally the right people for the roles were all lighter skinned.

“In the audition process, which was a long audition process, there were a lot of Afro-Latinos there. A lot of darker-skinned people. And I think they were looking for just the right people for the roles,” she said, referencing the casting decisions that were made. “For the person that embodied each character in the fullest extent…I think we are all very much like our characters, so much so that a lot of times it didn’t even feel like we were acting.”

She further explained, “And because the cast ended up being us, and Washington Heights is a melting pot of Black and Latinx people, Jon and Lin wanted the dancers and the big numbers to feel very truthful to what the community looks like.”

Lin-Manuel Miranda, who wrote the lyrics for the 2008 Broadway musical, wasn’t interviewed by The Root but he did address the issue in a recent interview.

Check out the conversation below and let us know what you think:

The post SOURCE LATINO: ‘In The Heights’ Receives Backlash For Lack of Afro-Latinx Representation appeared first on The Source.