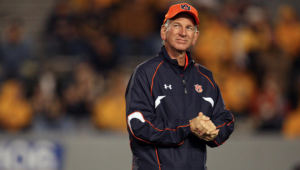 While NFL players such as Colin Kaepernick have sacrificed their careers for social and political stances, an Alabama Senator says that the new draft picks coming into the league should veer away from political conversations. In his words ,”less talking and more playing.”

Senator Tommy Tuberville, who has coached several NFL draft picks during his tenure as a head coach, says the country is too divided to have any players with a platform to speak out about any social or political issues that are faced in this country.

“Nobody’s looking for an outspoken person,” Tuberville said when asked what advice he would give to the players going into the draft this week.

“Everybody wants to make an opinion and that’s fine,” Tuberville tells TMZ Sports. “But, I think, especially for young people to get involved in something that maybe they might not understand as much, I think they need to let people that, whatever they do for a living, justify it.”

Some people, including the draft’s top pick Trevor Lawrence, didn’t get Tuberville’s memo. In fact, the Clemson star has been using his platform to bring his community together, as seen below.