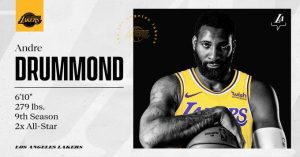 The titans in the NBA are gearing up for a championship running. Matching the buy-out deals of the Brooklyn Nets, the Los Angeles Lakers added Andre Drummond to their front line. Ahead of his debut, Drummond met with the media.

“I think our defense is going to be really crazy when those guys come back,” Drummond said to ESPN. “And I’m looking forward to it.”

Drummond is a walking double-double with a career average of 14.6 points and 13.8 rebounds. In addition to getting easy paint buckets and rebounds, Drummond will help the Lakers as they take on other giants like Nikola Jokic and take off some of the center position duties off AD.

“It’s been almost a month [and] 10-plus days since I last played. You can imagine the hunger and excitement I have to play and step on the court,” Drummond said. “I had an incredible month of work where I’m ready to play today.”

The Lakers will play the Milwaukee Bucks and Drummond will take the court in the No. 2 jerseys.