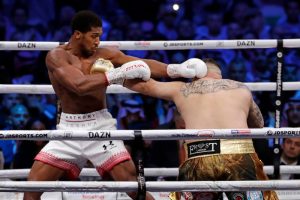 Andy Ruiz wants one more fight with Anthony Joshua to complete the trilogy.

Eddie Hearn told iFL TV on Monday that Ruiz reached out to him on Instagram about setting up a third fight with Joshua, noting that he “wouldn’t rule out any scenario” for Joshua.

“That’s a fight that I think we’d be interested in. If you’re going to America, Luis Ortiz is another guy you could fight. If you’re doing the U.K., Dillian Whyte, is that the fight to make?” Hearn said in the interview.

Joshua originally seemed to be facing Tyson Fury in August in a heavyweight unification bout before an arbitrator ruled that Fury would need to face Deontay Wilder for a third time before Sept. 15. After the ruling, Fury agreed to a deal with Wilder for a fight set for July 24.

Ruiz shocked the boxing world by beating Joshua by TKO back on June 1, 2019. However, Joshua reclaimed his WBA, IBF, IBO, and WBO heavyweight titles a few months later when, on Dec. 7, 2019, he defeated Ruiz in a unanimous decision.

Ruiz does deserve another shot at Joshua, considering he is the only man to put him down multiple times, besides, in boxing we all love trilogies.