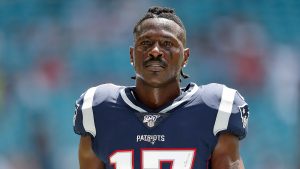 Antonio Brown will not be facing a trial in the civil sexual assault lawsuit filed against him by Britney Taylor.

Brown’s representative Alana Burstyn issued a statement on Wednesday announcing that the free-agent wide receiver has resolved his dispute with Britney Taylor, his former trainer, and friend. Burstyn said in the release that Brown and Taylor have been friends for more than a decade and that they reflected on their relationship and feel it is time to move forward.

Taylor worked for Brown as a personal trainer and alleged that Brown sexually assaulted her multiple times in 2017 and 2018. Brown was suspended for the first eight games of the 2020 season for multiple violations of the league’s Personal Conduct Policy.

Brown is currently a free agent fresh off his first Super Bowl win. Brown caught 45 passes for 483 yards and four touchdowns with the Bucs last season. With this latest drama behind him, it shouldn’t take long for a team to sign Brown to a new contract for the upcoming season.