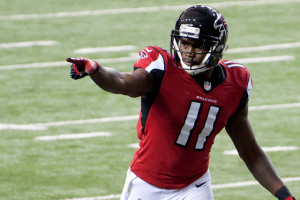 Julio Jones is one of the best wide receivers in the NFL for some time now. The Atlanta Falcons couldn’t possibly think about moving him? The Falcons have received calls from teams that are interested in acquiring Jones, Ian Rapoport of NFL Media reports. While the Falcons would not be able to trade Jones prior to June 1 because of the salary cap implications, Rapoport is not ruling it out.

Jones is the Falcons’ all-time leader in catches (848) and yards (12,896), and his 60 touchdowns rank him second behind Roddy White. Jones has played his entire career in Atlanta since being the No. 6 overall pick in the 2011 draft — when the Falcons used five picks to trade up from No. 27 to take him.

Why would the Falcons think about moving their All-Pro wide receiver, it’s because of his salary-cap number and cap mismanagement by Falcons’ former general manager, Thomas Dimitroff.

The team did not restructure Jones’ deal, though, with a $23.05 million cap hit and his base salary of $15.3 million fully guaranteed.

If the Falcons are willing to move off Jones, expect a number of NFL teams willing to add him to their rosters.