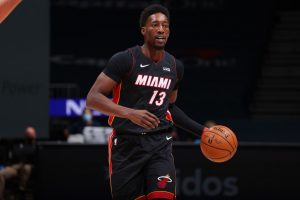 Bam Adebayo feels like he was snubbed out of being considered for the NBA Defensive Player of the year award. Adebayo, who is having another stellar season for the Miami Heat, took to Twitter once the finalist was named and simply had a one-word reply when he didn’t see his name.

The NBA announced that Ben Simmons, Rudy Gobert, and Draymond Green are the finalists for this year’s award. Gobert won the award in 2018 and 2019, while Green won it in 2017. Simmons has not won the award. Adebayo was named to the All-Defensive Second Team last year.

The snub of Adebayo virtually ensures that his five-year contract extension will remain at the $163 million level. The contract would have risen if the Heat big man was awarded the Defensive Player of the Year, was named to the All-NBA First Team, or won the MVP.

The post SOURCE SPORTS: Bam Adebayo Believes He Was Snubbed For NBA Defensive Player Of The Year Consideration appeared first on The Source.