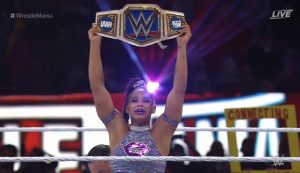 Bianca Belair defeated Sasha Banks in the main event of Wrestlemania night one to become the new Smackdown Women’s Champion.

The match’s closing sequence saw Banks avoid one KOD and tug at Belair’s hair. Belair then hit Banks with a hair whip, which appeared to lacerate Banks. Belair then successfully hit the KOD to get the pin.

Both Belair and Banks appeared to be emotional as the opening bell rang for the match, with Belair seemingly fighting back tears. It was noted on the broadcast that this was the first time two Black women had wrestled for a championship at WrestleMania.

“I love the fact that this is not just something that’s just about me and it’s not just about making history,” Belair, told the Tampa Bay Times last week leading into WrestleMania “It’s about going out and representing for women and for Black women. It’s going to be amazing.”

In front of 25,000 fans, both ladies stole the show and put on the best wrestling match of the weekend. This year’s WrestleMania seems to introduce new stars and nobody stardom looks brighter right now than Belair.

The post SOURCE SPORTS: Bianca Belair Wins The Smackdown Women’s Championship In The Main Event Of WrestleMania Night One appeared first on The Source.