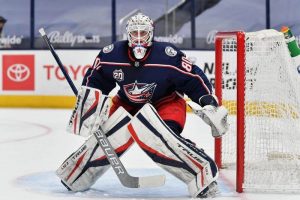 Tragic news out of the NHL.Columbus Blue Jackets goalie Matiss Kivlenieks died in a freak fireworks accident on the Fourth of July. He was only 24 years old.

Blue Jackets president of hockey operations John Davidson said in a statement Monday that the team is “shocked and saddened” by Kivlenieks’ death. He extended condolences to Kivlenieks’ mother Astrida and the rest of his family.

“Kivi was an outstanding young man who greeted every day and everyone with a smile and the impact he had during his four years with our organization will not be forgotten,” Davidson said.

Kivlenieks, who was undrafted, signed with Columbus as a free agent in 2017.