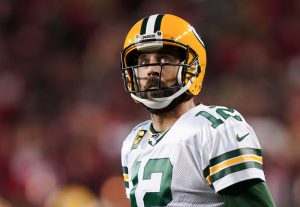 Aaron Rodgers made it clear it wants out of Green Bay and now it looks like we can identify one team, in particular, that is willing to help the NFL MVP out.

In an appearance on “Get Up!” Tuesday morning, ESPN’s Dianna Russini reported that the Denver Broncos appear to be more interested in Rodgers than any other team. The belief is that they are going to offer the most for the 37-year-old if and when a formal offer is made.

Russini added that the belief around the NFL is that “this is not going to work out” between Rodgers and the Packers. She hinted that team executives in Green Bay are feeling that as well.

“The sentiment there and the feeling I get is deflated. They’re absolutely deflated at this point,” Russini said of the Packers’ brass. “We know they’ve been trying to fix this and trying to mend it, but they know this is up to a very strong, stubborn, smart quarterback named Aaron Rodgers, who is gonna do what Aaron Rodgers wants to do.”

It wouldn’t be the first time a team went all-in on an aging MVP of the league. Ironically, the Broncos landed an aging Peyton Manning, who ended up taking the Broncos to two Super Bowls and winning one before retiring for good.

The post SOURCE SPORTS: Broncos Willing to Pay a Kings Ransom to Land Aaron Rodgers appeared first on The Source.