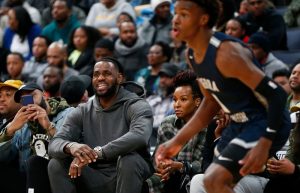 Bronny James is watching the Brooklyn Nets stack the deck and he believes they doing it to stop his dad in a potential NBA Finals. matchup.

The 16-year-old son of LeBron James took to Snapchat this weekend to react to the news of LaMarcus Aldridge signing with the Nets. Bronny reposted a viral tweet that read, “All this to stop a 36-year-old man in Year 18” over a picture of his father.

The Nets are the heavy favorites to come out of the Eastern Conference, as they are the first NBA team since the 2010 Boston Celtics to feature five players that have played in at least five NBA All-Star games. Young James has every right to feel the way he does. The Nets are the real like Monstars.

The post SOURCE SPORTS: Bronny James Not a Fan Of The Way Nets Are Stacking The Deck Just To Beat His Dad appeared first on The Source.