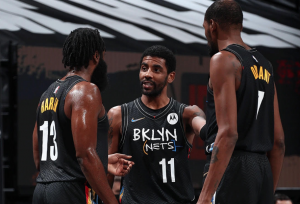 The Brooklyn Nets are playing stellar basketball and they could win the whole thing.

According to Sports Betting Dime, the Nets are +160 favorites to win the NBA Championship.

Finishing the regular season as a second seed, the Nets endured  the pressures of a shortened NBA season, an in-season trade to acquire James Harden and adding Blake Griffin via a buyout to their active roster, the Nets have transitioned well at every peak and valley. They’re still riding high and currently hold a 2-0 lead in their Eastern Conference semifinals series with the Milwaukee Bucks. Game 3 is tonight(June 10).

“The Milwaukee Bucks have lacked continuity in two games,” Bally Sports Network’s National NBA writer, Brandon “Scoop B” Robinson shares. “But that doesn’t mean they’re out of it. They came out hot in the first round against the Miami Heat and it seems that Jrue Holiday and Khris Middleton aren’t clicking just yet. Hopefully that will change.”

What made it worse? The Nets did it without one of their key players in their Big 3.

James Harden is still out with a hamstring injury after playing all of 43 seconds in Game 1. In Harden’s absence, the Nets shot 50% from the three-point line (21-for-42) and were led by the usual stars of Kevin Durant, who played only three quarters, and Kyrie Irving. Durant finished with 32 points and Irving had 22 points.

The Nets took command right from the jump and led 39-16 at the end of the first quarter. The game got so crazy that at one point the Nets led by 49 points in what would become their most lopsided playoff victory ever. The last time Brooklyn built a 2-0 lead, they lost Game 3 on the road in Round 1 to the Boston Celtics. Milwaukee has a silver lining with James Harden out for Game 3.

“Kyrie Irving and Kevin Durant aren’t the only workhorses for Brooklyn,” says Scoop B. “Bruce Brown and Mike James are also holding their own.”

Assuming the Nets make it out of Round 1, they’ll play the winner of the Philadelphia 76ers/Atlanta Hawks series in the NBA’s Eastern Conference Finals.

Joel Embiid and Trae Young have both been enforcers for their respective teams.