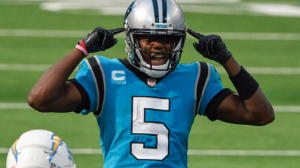 The Carolina Panthers have traded quarterback Teddy Bridgewater to the Denver Broncos for a sixth-round pick in the 2021 NFL draft.

ESPN’s Adam Schefter reported that the trade does not necessarily mean Denver will not take a quarterback in Thursday night’s NFL Draft. The Broncos hold the No. 9 overall pick there.

“Acquiring Teddy Bridgewater adds competition, experience and a strong veteran presence to our quarterback room,” Broncos general manager George Paton said in a statement. “He’s a talented player and leader who’s had success in this league in a number of different situations.”

While it’s not yet clear what the Broncos’ vision is for Bridgewater, it’s doubtful they’d make this move if they weren’t prepared to give the veteran quarterback the chance to start.

Bridgewater, who signed a three-year, $63 million deal with the Panthers before last season, threw for 3,733 yards in 2020, with 15 touchdowns and 11 interceptions.