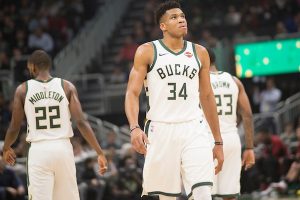 Kevin Durant put on a masterpiece performance against the Milwaukee Bucks to help the Brooklyn Nets take a 3-2 game lead in their best of seven Eastern Conference Semifinals series. Durant torched the Bucks for 49 points, 17 rebounds, and 11 assists. While the Bucks threw everyone to try to slow down Durant, one player never guarded him.

Giannis Antetokounmpo was the Defensive Player of the Year last season and is a four-time All-Defensive team player. Shouldn’t he be defending the opposing team’s best player, at the very least, down the stretch?

Portland Trail Blazers guard CJ McCollum pointed that out on Twitter. “Easy$” is a reference to Durant, whose Instagram handle is “EasyMoneySniper.”

McCollum is 100 percent right. It took Durant going nuclear for the Nets to win the game. The Bucks had no answer for him, but maybe they did if the 2x former MVP actually wanted to step up and attempt to guard Durant.

After the game, Antetokounmpo vowed to take the on challenge of guarding Durant in game 6 on Thursday night as the Bucks will be facing playoff elimination.