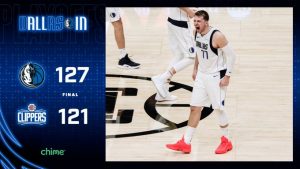 Is it Scary Hours for the Los Angeles Clippers? One of the conference favorites is now reeling on the ropes following a second at home loss to the Dallas Mavericks. If you ask the stars of the team, there are no worries about Luka Doncic and the gang as they are heading to Dallas.

“It’s a competition. We got to rise to the occasion. The fact of the matter is if we don’t, we’re done for. There is no level of concern,” Paul George said to ESPN. “We just got to play our game, we got to play through this. We got to incorporate our defense. Luka is going to get his touches. We just got to do a better job defensively of quieting everyone else.”

The lack of concern echoes with Clippers coach Ty Lue who stated he is not concerned either.

“We gotta win four games, and you come in on an opposing team’s floor and play, there’s no pressure on you to make shots,” Lue said. “You just try to come in and steal a game, steal two games. But now they gotta go home and keep up the same shooting. It’s easy to go on the road and do that with no pressure. We’ll see in Game 3.”

Should the Clippers find some concern after two master performances by Luka?

The post SOURCE SPORTS: Clippers Drop in 0-2 Hole, Paul George Says “There Is No Level of Concern” appeared first on The Source.