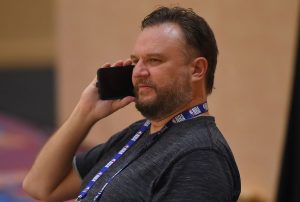 Daryl Morey and the Philadelphia 76ers were fined $75,000 each for a tweet involving the Curry brothers that the league regarded as tampering.

Steph Curry posted a photo on Instagram last week after his brother Seth had a big game for Philly against Washington. Seth scored a team-high 30 points in Philly’s Game 5 win over the Wizards to clinch the series. Steph was recognizing his brother’s big game.

Morey then went on to Tweet on that picture ” Join em”

Morey claimed shortly afterward he meant no ill will or tampering anything.

It’s hard to see how Morey meant anything other than suggesting Stephen Curry team up with younger brother Seth. Morey should have said to the older Curry there is plenty of room on the 76ers bandwagon or something like that. It would have saved him some coins in his pocket.

The post SOURCE SPORTS: Daryl Morey Hit With a $75k Fine For a Tampering Tweet Over Steph Curry appeared first on The Source.