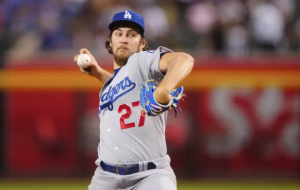 According to an exclusive report from TMZ Sports, the Los Angeles Dodgers are slated to start star pitcher Trevor Bauer in their game against the Washington Nationals on Sunday despite the fact that Bauer has been accused of sexual assault by the same woman on two different occasions.

Dodgers GM Dave Roberts made the announcement today (July 1), establishing the rule to reporters that the Major League Baseball organization has advised the Dodgers to let the Hollywood, California native pitch while a MLB investigation into the allegations are underway.

“It’s actually out of our hands,” Roberts said. “Regardless of what direction the organization wanted to do, it’s something that — this is what has to happen. And so it’s out of everyone’s hands. I’m in the position of following the lead of Major League Baseball. Their recommendation was for us to use our scheduled Sunday starter and to move forward and have him start that game Sunday.”

Bauer is set for the mound on Sunday against the Nats.