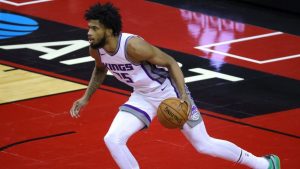 Marvin Bagley III seems to indicate he may want out of Sacramento after liking a tweet on that subject.

The tweet was about Deandre Ayton saying the 2018 NBA Draft class is the best ever. Someone added in a comment saying they need to get Bagley out of Sacramento.

Also, Bagley removed the Sacramento Kings from his bio on Twitter, which clearly led to plenty of speculation about his desire to leave.

If you’re wondering, there might be some smoke to this fire tweet.  In January, Bagley’s father sought the Kings to trade his son. A report in March said the Kings were even shopping him before the trade deadline. While Bagley is a talented big man, the Kings must feel they messed up by not drafting Trae Young or Luka Doncic over him in the 2018 NBA draft.

Maybe a breakup and change of scenery might do Bagley well going forward.

The post SOURCE SPORTS: Does Marvin Bagley Wants Out Of Sacramento? appeared first on The Source.