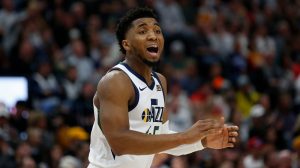 Dwyane Wade is still relatively new as a minority owner of the Utah Jazz but one of the toughest tasks that need to be addressed might be happening soon.

Speaking this week on “The Hoop Collective,” Brian Windhorst of ESPN indicated that Wade could be concerned about Utah’s ability to keep franchise player Donovan Mitchell around for the long term.

Windhorst also noted on the podcast the communication issues with head coach Quin Snyder and former executive Dennis Lindsey. Besides the poor communication, the Jazz did finish the season with the best record in the league at 52-20.

The two-time All-Star Mitchell just wrapped up his fourth season in Utah. He recently signed a five-year, $163 million extension with the Jazz, which kicks in starting next season which should give Wade some time to keep Mitchell happy and locked in on Jazz basketball.