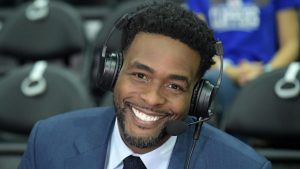 Chris Webber’s time at TNT appears to be over. Webber and TNT parted ways, the New York Post’s Andrew Marchand reported on Thursday night. Webber was not paired with Marv Albert for the first game of TNT’s doubleheader on Thursday. Instead, Reggie Miller served as the analyst.

TNT and Webber’s parting ways did not come as a surprise. Marchand says that the two sides hadn’t really had conversations about Webber’s future and that there was a sense TNT did not want the former NBA star back. It was also noted that Webber didn’t want to return either.

Webber had worked as a color commentator and occasional studio analyst at TNT since 2008. He joined the network shortly after the conclusion of his 15-season NBA career.  The timing of the separation seems weird because the NBA playoffs start next week. No word to who will be paired with Albert for the playoffs. Marchand believes Miller, Grant Hill, or even Jim Jackson could fill Webber’s roles.