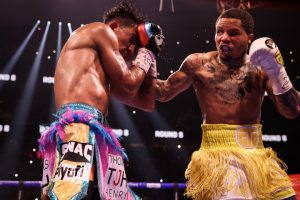 Gervonta “Tank” Davis continues to showcase why he has next on the boxing pound-for-pound charts. Davis moved up in weight class to main event his second straight pay-per-view fight against Mario Barrios and defeating him by knock out in the 11th round down in Atlanta. With the win, Davis becomes a three-division champion and improves his record to 25-0.

Although Barrios was gamed and was active for most of the fight, Davis kept his cool and rallied in the 11th round to floor Barrios for the third time in the fight with a left uppercut to the body. After Barrios made it back to his feet, a flurry from Davis along the ropes forced referee Thomas Taylor to jump in at 2:13 of the round.

“I made it tough, I made it tough. I definitely could have made it easier but it is what it is,” Davis said. “I went up two weight classes and I got the job done.”

Davis was up on all three scorecards before the knockout: 96-92, 97-91, and 96-92. Davis’ best round was by far the 8th. That’s when he figured out Barrios and knocked him down for the first time in the fight. Barrios was in trouble then of losing the fight but rallied to survive the 8th.

“Tank’s explosive,” Barrios said after the fight on Showtime. “He caught me slipping.”

No telling what Davis’ next move will be. He could move back down in weight or remain at his current 140 pounds. Either way, his next fight might be another pay-per-view headliner.

The post SOURCE SPORTS: Gervonta Davis Moves Up In Weight to Become a Three-Division Champ appeared first on The Source.