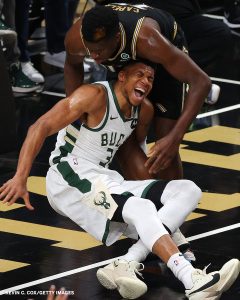 The Milwaukee Bucks could be in some serious trouble if they have to play the rest of the Eastern Conference Finals without Giannis Antetokounmpo.

Antetokounmpo suffered a knee injury midway through game 4 of the Eastern Conference Finals against the Atlanta Hawks. Antetokounmpo jumped up to contest an alley-oop from John Collins to Clint Capela. The two-time MVP landed awkwardly on his left leg, his knee buckling.

“We’ll take everything as it comes,” Budenholzer said. “We’ll evaluate it. We’ve got a heck of a team, a heck of a roster. … The guys will prepare. They’ll be ready.”

“It’s not good,” Bucks forward P.J. Tucker said. “It’s not good losing anybody on your team and losing your best player stinks.”

When Antetokounmpo exited the game, the Hawks attacked the paint en route to a 110-88 win. The Hawks were without their leading scorer, Trae Young, who was held out with a bone bruise in his right ankle.

“There’s no excuses,” Tucker said. “Everybody is hurt. Everybody is battling injuries. You’ve got to fight through.”

The Eastern Conference Finals becomes a best of 3 series. Antetokounmpo’s status for game 5 is unknown right now. If the Bucks are to win at least a game 5 without him, they will need a collective effort from everyone on the team to do it.