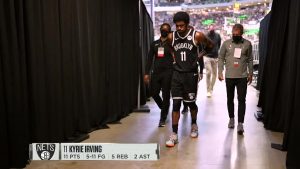 After Irving landed awkwardly on his right ankle, Davis commented on Instagram that the leg was the same one Irving used to disrespect the Boston Celtics’ mid-court logo earlier in the postseason.

“Karma is real. Energy is real no matter what you guys say,” Davis said in another IG comment. “That logo means something negative or positive. Ky wished that on hisself (sic). Energy is real, always have respect for other no matter if its (sic) a logo are (sic) not.”

After the Nets’ Game 4 victory over the Celtics in the first round, Irving greeted teammates at center court and stomped on the drawing of Lucky the Leprechaun, the team’s mascot.

Davis clearly still feels away about what Irving did in Boston. For the record, it isn’t the same foot that Irving stepped on Lucky with. That was Irving’s left one. The injury was to Irving’s right one.

The post SOURCE SPORTS: Glen Davis Believes Karma is The Reason Kyrie Irving is Injured appeared first on The Source.