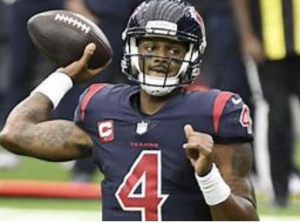 As more accusations of sexual assault by Houston, Texas quarterback Deshaun Watson come out, more people are weighing in on the allegations. According to Defector Media, controversial remarks made by Houston Chronicle football writer Aaron Wilson made on WEEI Radio’s The Greg Hill Show may have cost him his job.

During the March 19 appearance, Wilson reportedly said the lawsuits against Watson amounted to “ambulance chasing” and compared the women who filed them to terrorists.

“In his case, you know, it’s kind of you don’t negotiate with terrorists,” Wilson said. “People are demanding money, they’re asking for money. It kept escalating, it kept going up and up and up. You’re talking about more and more funds, I’m not going to say how much it got to, but my understanding is, you know, that there was an admission that, it was, you know, something, you know just that this was, you know, just a money grab.” said Wilson.

“I’m skeptical,” said Wilson. “Let’s put it like that…I wanna be careful. I’m not dismissing that it could be true, in that, I wasn’t there. The people that know what happened are him and those alleged women, who haven’t put their name on it. It’s all Jane Doe…There’s no way to vet it. There’s no way to really look into it…just because someone is accused of something that doesn’t mean they did it.”

Traditionally journalists are expected to remain unbiased. In this case, Wilson shared his opinion, which reportedly resulted in him losing his job. Sexual assault is a serious thing and everyone involved is having their case fully investigated by the NFL and Houston Police department.