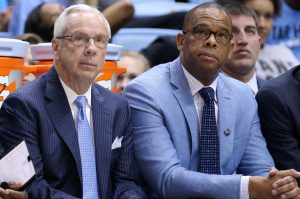 North Carolina has reached an agreement in principle to hire UNC assistant coach Hubert Davis to replace Roy Williams as the school’s basketball coach. With that move, Davis will become the first black head coach in the school’s storied history.

A source told Jeff Goodman of Stadium that Davis would be the choice to replace Williams after several big-name coaches were not interested in taking the position.

“I am honored and humbled to be given the opportunity to lead this program,” Davis said in a statement released by the school. “I would not be here without Coach Dean Smith, Coach Bill Guthridge and Coach Roy Williams; they taught me so much — and I’m eager to walk their path in my shoes and with my personality. I also would not be here without Chancellor Guskiewicz and Bubba Cunningham. I appreciate their faith in me and I look forward to working closely with them.”

Davis has been considered a frontrunner for the position since Williams announced his retirement. Davis played for North Carolina from 1988-1992 and has been an assistant on Williams’ staff since 2012.

“I love this University. I played here, I earned my degree here, I fell in love with my wife here, I got married here, I moved here after I retired from the NBA and I have raised my family here,” Davis said. “I am proud to lead this team, and I can’t wait for all that comes next.”