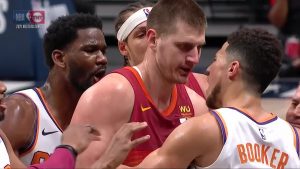 A few NBA players were stunned at the flagrant foul called on Nikola Jokic during the game 4 series between the Phoenix Suns and Denver Nuggets.

Jokic was tossed for a hard foul he committed on Cameron Payne late in the third quarter. Jokic was given a flagrant 2 foul, which triggered the automatic ejection.

Players such as Ja Morant and Trae Young couldn’t believe the ejection. Morant called the league “soft” over the call.

The league deemed Jokic’s contact with Payne to be excessive and above the shoulders.

“We saw wind-up, impact and follow through, which led to unnecessary and excessive contact above the shoulders and also into the face.”

While fans and players in the league aren’t fans of the call, to say the league is getting soft by trying to protect its players seems like a reach.