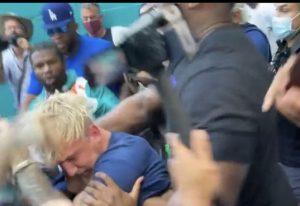 It became the talk of the Internet, Jake Paul and Floyd Mayweather engaged in a brawl at the Hard Rock Stadium at Miami Gardens and it all started over a TMT cap.

During a heated spat, Jake Paul snatched Mayweather’s cap, said “Gotcha Hat” and attempted to run, infuriating Mayweather to the point that he chased the amateur boxer and began to swing. A big tussel of the two fighters and security occured, leading to some injuries and Paul being banned from the fight next month.

Jake Paul would hit Twitter and reveal why he took the hat.

“I stole his hat because he steals peoples money with boring fights,” Paul said.

You can see the entire encounter below.

The post SOURCE SPORTS: Jake Paul Reveals Why He Confronted Mayweather and Stole His Hat appeared first on The Source.