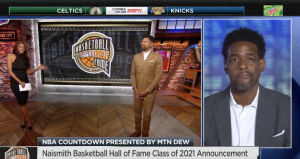 During an appearance on ESPN, an emotional Webber discussed how much it means to him to be elected to the Hall of Fame after so many years of not being voted in. Rose, who was in the studio for ESPN, congratulated Webber and told him, “I love you, my brother.” Webber appeared to fight back tears.

The moment was significant because Webber and Rose grew up together in Detroit. They then both attended college at Michigan and were part of “The Fab Five.” Rose and Webber were not on good terms several years ago, as they traded some pretty heavy shots over a documentary about their Wolverines team.

It took Webber several years to make the Hall of Fame, and many believe he was snubbed for so long because of his involvement in the NCAA scandal with Ed Martin at Michigan. Webber distanced himself from Michigan and his former teammates for quite some time, and Rose spoke out in favor of him reconciling with the school back in 2018.

Webber also mentioned Rose’s mother during Sunday’s segment. Rose’s mother, Jeanne, died earlier this year from lung cancer. Rose gave an emotional tribute to her on TV recently for Mother’s Day. Webber knew Rose’s mother from when he and Rose were childhood friends. That might have been the olive branch needed to mend this childhood friendship that produced two NBA players.