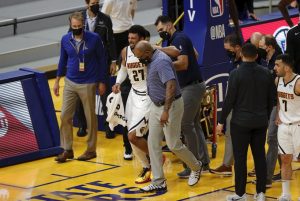 In the same game that Stephen Curry made history, the Denver Nuggets took a hit. Star guard Jamal Murray went down late in the 116-107 loss and will be out for a considerable timeframe with a torn ACL.

After the game, Nuggets coach Mike Malone addressed the media.

“As of right now, obviously very down locker room,” Malone said. “…No definitive answer right now. We will wait for the imaging and go from there.

“Some of the [assistant] coaches said when they watched the replay it looked like he hyperextended it. He just came back [from a right knee injury], he was gone for four days. His [right] knee had been bothering him… just an awful feeling. Keep Jamal in your thoughts and prayers, and hopefully we will get some good news.”