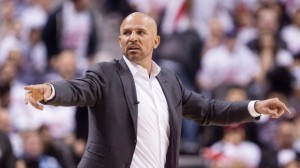 Jason Kidd appears to not be interested in leaving the Los Angeles Lakers sidelines right now. Kidd told ESPN’s Adrian Wojnarowski that he will not interview for the Portland Trail Blazers head coach job.

“Portland’s a first-class organization and will have great candidates for its head coaching job, but I’ve decided not to be one of them,” Kidd said. “Whoever they choose will have big shoes to fill from Terry (Stotts).”

Damian Lillard said immediately after Stotts was fired that Kidd is “the guy I want.” That public endorsement actually backfired, as Wojnarowski says Kid was uncomfortable with the idea of pursuing the job after receiving Lillard’s endorsement.

For now, the Blazers will begin to start their coaching search by putting together a list of candidates. According to some reports, those candidates include Chauncey Billups, Jeff Van Gundy, Mike D’Antoni, and Juwan Howard.