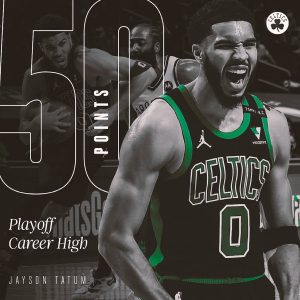 The playoff walls were closing in on Jayson Tatum and the Boston Celtics. Down 0-2 to the dominant Brooklyn Nets, Tatum handed out a 50-piece to make sure the series won’t end in a sweep.

The Celtics would win 125-119 over the Nets taking the air out of the talk of this being a Kyrie Irving return game and cementing that this is now Tatum’s town.

“It’s just one of those nights,” Tatum said. “Trying to protect home court, trying to get a win at all costs.

The home-court advantage for Boston will only get stronger as they will host a full 17,000 capacity in the TD Garden on Sunday night for Game 4.

“Obviously, I know I had it going but just trying to see where the help was, somebody was coming, find an open man. In those situations, just make the right play,” Tatum said.

“Yeah, we’re expecting a bigger crowd on Sunday,” Irving said. “Happy it was a great start to seeing what this environment’s gonna be like and just looking forward to the challenge.”

Kyrie fielded a series of “Kyrie chants” during the game. Who will win Game 4 in your opinion?