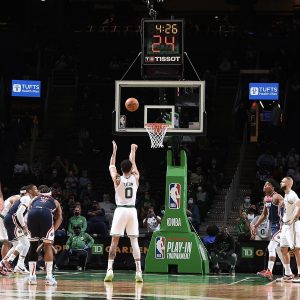 Jayson Tatum put the Boston Celtics on his bag and grabbed the 7th seed in the Eastern Conference behind a 50-point effort against Russell Westbrook and the Washington Wizards.

The 118-100 victory will now place Boston against the title favorites in the Brooklyn Nets.

Tatum’s childhood friend from St. Louis, but also opponent, Bradley Beal spoke to the excellence of the Celtics superstar after the game.

“It didn’t matter who was in front of him,” said Beal to ESPN. “That is something I have been trying to tell his ass for years. It’s tough when you guard him. He’s 6-9, he can get his shot off, he’s strong and can shoot the ball.”

Tatum would speak on himself after the game, revealing that as long as he believes in himself he will succeed.

“I don’t really get caught up in those who think I’m a superstar and those that don’t. What does that really mean? I know that my teammates, I’ve earned their respect. I’ve earned the respect of the guys I’ve played against and the coaches.”

Wednesday night two more play-in games will occur between the Los Angeles Lakers and Golden State Warriors and the night is kicked off with the San Antonio Spurs and Memphis Grizzlies.

The post SOURCE SPORTS: Jayson Tatum Drops 50 to Lead Celtics to 7th Seed in the East appeared first on The Source.