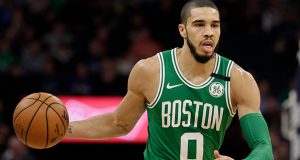 Boston Celtics All-Star Jayson Tatum hasn’t felt 100 percent since his bout with COVID 19. After another monster game for the Celtics in a win over the Portland Trailblazers on Tuesday night, Tatum was asked whether he is back to 100 percent. He said he was “very close” to being 100 percent. He also talked about how he began using an inhaler before games to help with breathing, which is not something he needed before having the virus.

“It’s a process. It takes a long time. I take an inhaler before the game since I’ve tested positive. This has kind of helped with that and opened up my lungs, and, you know, I never took an inhaler before. So that’s something different.

“I for sure feel better now than I did a month ago.”

Tatum said Celtics trainers have not indicated when he can stop using the inhaler.

Tatum contracted COVID-19 back in January. He missed three weeks of NBA action as a result of having the virus.

The post SOURCE SPORTS: Jayson Tatum Reveals He Uses An Inhaler To Help In Recovering From COVID-19 appeared first on The Source.