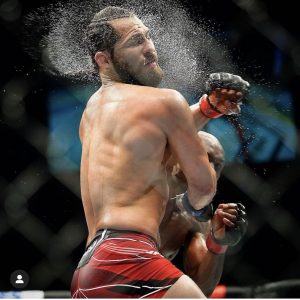 Kamaru Usman ended his latest title defense with an exclamation point. Usman beat Jorge Masvidal at UFC 261 in Jacksonville, Fla. on Saturday night for his 18th straight professional MMA win. He knocked out Masvidal with a punch straight to the face in the second round.

At UFC 251 last year, Usman (19-1) beat Masvidal via unanimous decision in a not-so-competitive bout. For what it’s worth, Masvidal came into that fight on just six days’ notice after Usman’s initially scheduled opponent, Gilbert Burns, tested positive for coronavirus. Usman now has his fourth straight title defense and his 14th straight UFC victory.

“You elevated me,” Usman said of Masvidal. “You made me get into the workshop. … I told everybody I’m still getting better. The sky is the limit for me as long as I’m doing this.”

“He’s got my number, man,” Masvidal said. “He beat me fair and square. God bless him, man.”

The post SOURCE SPORTS: Kamaru Usman Sends Jorge Masvidal To Sleep With a Devastating Punch At UFC 261 appeared first on The Source.