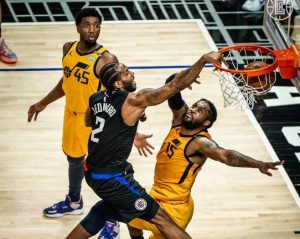 Kawhi Leonard went viral on Monday night after his monster poster dunk on Derrick Favors in game 4 of the Los Angeles Clippers vs the Utah Jazz Western Conference semifinals game.

Leonard got the ball just beyond the three-point line, drove past Royce O’Neale in the lane, and then slammed it over Derrick Favors to give the Clippers a 62-38 lead with 1:24 remaining in the second quarter.

The dunk was so hot that Joel Embiid, fresh off a loss to the Atlanta Hawks in Game 4, was watching the game while doing his presser and had to stop, mid-answer, to react to Kawhi’s massive dunk.

The Clippers went on to win, 118-104, to tie the series at 2-2. Leonard finished with 31 points on 9-of-19 shooting from the field but left the game late in the fourth quarter with an apparent knee issue. Leonard’s dunk is definitely the dunk of the playoffs and like his game, it was silent and deadly.