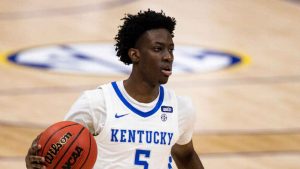 Terrence Clarke, a freshman guard of the Kentucky Wildcats this past season, who was prepping for the NBA Draft died in a car accident Thursday afternoon. Clarke was in the Los Angeles area, Klutch Sports CEO Rich Paul told ESPN.

Clarke’s mother was by his side when he died. He was 19.

“We are saddened and devastated by the tragic loss of Terrence Clarke,” Paul told ESPN in a statement. “Terrence was an incredible, hard-working young man. He was excited for what was ahead of him and ready to fulfill his dreams. Our prayers go out to Terrence and his family, who ask for privacy during this difficult time.”

I am absolutely gutted and sick tonight,” Kentucky coach John Calipari said in a statement. “A young person who we all love has just lost his life too soon, one with all of his dreams and hopes ahead of him. Terrence Clarke was a beautiful kid, someone who owned the room with his personality, smile and joy. People gravitated to him, and to hear we have lost him is just hard for all of us to comprehend right now. We are all in shock.

Clarke played in the first seven games for the Wildcats before sitting out a majority of the season with an ankle injury.