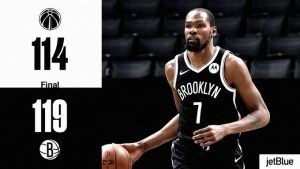 Kevin Durant doesn’t plan on relaxing this summer. After the Brooklyn Nets got eliminated from the postseason by the Milwaukee Bucks, Shams Charania reported Durant is expected to commit to playing for Team USA for the upcoming Summer Olympics in Tokyo.

If Durant commits, it would be his third time in a row playing for Team USA. In 2012 and 2016, both Olympic Games resulted on winning gold medals.

Over the course of his national team career, Durant is a perfect 39-0 record and has appeared in 45 games. Durant holds averages of 19.1 points, 5.4 rebounds, 2.5 assists and 1.3 steals while shooting 53.1 percent from the field and 48.6 percent from three to go with 88.3 percent at the foul line.

The Olympics will run from July 23 through August 8th.