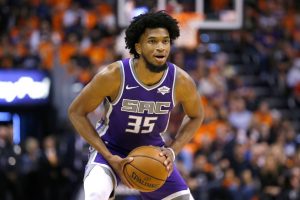 With the NBA trading deadline approaching, the Sacramento Kings are looking to unload Marvin Bagley.

Chris Haynes of Yahoo! Sports reported on Monday that the Kings have made the 22-year-old big man available for trade. The report adds that Sacramento offered Bagley to the Detroit Pistons in exchange for up-and-coming rookie Saddiq Bey, but got rebuffed. Haynes also says that both Bagley and the Kings are “keen” on ending their partnership.

Bagley has failed to meet expectations in Sacramento, largely because he was drafted ahead of All-Stars Luka Doncic and Trae Young. Right now, Bagley just has to find a way to stay on the court. He’s played just 112 career games, the third-lowest amount of any 2018 lottery pick, and 62 of those came in his rookie season.

While Bagley isn’t a scrub, a change of scenario could benefit him.