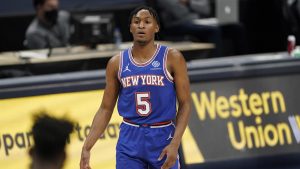 NBA fans have been extra during these first weeks of the NBA playoffs. Now New York Knicks rookie Immanuel Quickley is adding his story to what happened to him on his own homecourt.

Quickley told reporters Monday that beer was thrown at him during Game 2 of his team’s series against the Atlanta Hawks at Madison Square Garden.

“Not sure why, not even sure who did it, but it happened,” said Quickley, per Stefan Bondy of the New York Daily News. “I guess that’s part of having fans in the game.”

It is unclear if the beer was thrown by a home fan or an away fan. Quickley did have a subpar Game 2, finishing with four points on 2-for-9 shooting from the field so it could have been a fan from either side.

The NBA has already said that they are enforcing “an enhanced fan code of conduct” in response to the incidents.

The Knicks will return to MSG for a crucial Game 5 on Wednesday with their season on the line. The Hawks currently lead the series 3-1 after a huge win on Sunday.

The post SOURCE SPORTS: Knicks’ Immanuel Quickley Says He Had Beer Thrown At Him At Madison Square Garden appeared first on The Source.