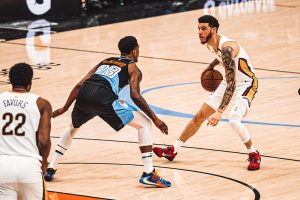 Lonzo Ball could be calling Madison Square Garden home soon. According to Ian Begley of SNY, the New York Knicks are keeping tabs on New Orleans point guard Lonzo Ball, and are monitoring the price it would take to make a move for him. Ball reportedly has fans within the organization, though there is some debate over whether he could be considered the long-term answer at point guard if he were acquired.

The Knicks are currently 22-22 and sit as the 6th seed in the Eastern Conference. The team has already eclipsed last year’s win total from last season and the sense around the league is that the organization has turned the corner culturally.

Ball will be a free agent in the summer and the Knicks already had plans to pursuit him then. If the Pelicans are willing to take on some of the Knicks’ assets, they would at least not lose Ball for nothing.

The post SOURCE SPORTS: Knicks Keeping An Eye On Lonzo Ball As Trade Deadline Looms appeared first on The Source.