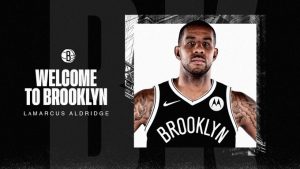 Brooklyn Nets have added LaMarcus Aldridge to their already stacked roster. Brooklyn’s latest addition is a 7-time all-star and former San Antonio Spur. While Griffin is now playing, Aldridge will look to find his role on the loaded team.

Following the announcement, many fans took to Twitter to state how they feel about the move. Many included Lakers star LeBron James. The Lakers and Nets matchup is the projected 2021 NBA Finals prediction for many fans and analysts across the league. “Lakers in 6” and “He’s 36” quickly became trending topics.

“All this to beat LeBron,” said one fan.

“Y’all need the Avengers to beat him?”

It is a clear consensus across the league that Brooklyn has teamed up to be the clear favorite to come out of the Eastern Conference. While the conference opponents, such as the 76ers and Bucks, are formidable, it’ll be tough to stop that Nets powerhouse. With the Aldridge addition, the Nets currently have a roster with a combined 40 NBA All-Star appearances.

Peep some more of the reactions below from the move.

The post SOURCE SPORTS: LaMarcus Aldridge Signs To The Brooklyn Nets appeared first on The Source.