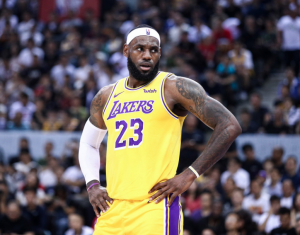 Things have gotten off to a rocky start for the Los Angeles Lakers with the return of LeBron James and Anthony Davis to the lineup.

Currently, the Lakers are in a three-way tie for the sixth seed in the Western Conference. With only 8 games left in the regular season, the Lakers could see themselves in the play-in tournament. That is something James isn’t a fan of.

James told reporters Sunday that it won’t matter where the Lakers are seeded if he isn’t at least close to full strength for the postseason, but he’s not thrilled that there are play-in games in general.

“It doesn’t matter at the end of the day if I’m not 100 percent, close to 100 percent, it (doesn’t) matter where we land. That’s my mindset,” he said. “If it happens that we end up at sixth or fifth or whatever the case may be, or if we end up in the playoff, whatever that . . . thing is — whoever came up with that s— needs to be fired, but whatever.”

NBA commissioner Adam Silver was talking up a play-in tournament in 2019 and team owners were reviewing proposals as far back as 2018. James was against the idea of a play-in when it was first floated.

Doesn’t matter if James is a fan of it or not. Lakers continue to struggle, they will be headed towards a scenario no defending champion would want to see.

The post SOURCE SPORTS: LeBron James Believes Whoever Came Up With The Play-In Tournament “Should Be Fired” appeared first on The Source.