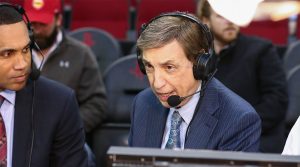 After over five decades of calling NBA action, Marv Albert is calling it a career. As first reported by Andrew Marchand of the New York Post, Albert has decided to retire from his broadcasting duties at the end of the NBA Playoffs. A formal announcement is expected soon from Albert, and TNT has begun to reach out to people around the league to record tributes to Albert to air during the playoffs. This means Albert’s final games will be the Eastern Conference Finals in June.

Albert has been an iconic voice on the league’s national TV broadcasts since 1990 when he became the lead play-by-play man for NBC’s NBA coverage. He has worked in the same capacity for TNT since 1999. Long before that, he was known as the voice of the New York Knicks, a role he held from 1967 to 2004.  Albert was also keeping busy outside of basketball by calling NHL games and NFL games as well as boxing, tennis, and horse racing.

No word yet as to who Albert will be calling his final games with, as TNT and Chris Webber, his most recent broadcast partner, has agreed to part ways last week.

The post SOURCE SPORTS: Legendary Broadcaster Marv Albert to Retire After The Eastern Conference Finals appeared first on The Source.