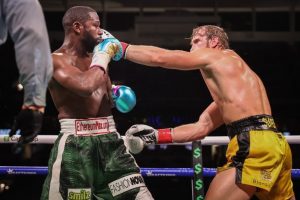 If you expected Floyd Mayweather to knock out Logan Paul in his exhibition match on Sunday night, sorry to you. The two linked up in Hard Rock Stadium after much fan-fare and surprisingly, Paul and Mayweather went the full eight rounds.

“He’s better than I thought he was,” Mayweather said. “I was surprised by him tonight. Good work. Good little guy.”

“I don’t want anyone to tell me anything is impossible ever again,” Paul said. “The fact that I’m in here with one of the best boxers of all times proves the odds can be beat.”

An unofficial scorecard from ESPN tallied the fight at 78-74 after landing a total of 43 punches to Paul’s 28.

You can see clips from the fight below.

The post SOURCE SPORTS: Logan Paul Goes the Distance in Exhibition Match with Floyd Mayweather appeared first on The Source.