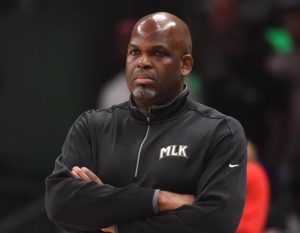 After stepping in during the middle of the season and bringing the Atlanta Hawks within two wins of an NBA Finals birth, the team announced a new deal for head coach Nate McMillan.

“We’ve now worked together for four months. We’ve had a good working relationship, and I’m excited he’s going to be our head coach moving forward.”

McMillan stepped into the head coaching role and closed the season with a 27-11 record and eliminating both the New York Knicks and Philadelphia 76ers.

“It’s just a blessing. It really was a blessing. I really didn’t look back on what had happened last season,” McMillan said after the season ended. “My focus was on, once I got this opportunity, to come down and try to help first Coach Pierce, and then when the opportunity presented itself for me to coach this team, to try to make it better.

“That was just the focus this entire season, trying to make it better here for this organization. It really was a blessing. I thank God for all the opportunities and the blessings that have been provided to me this year.”