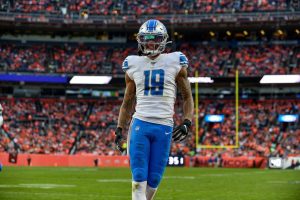 Kenny Golladay is in a New York state of mind. Golladay on Saturday reached a four-year deal with the New York Giants. The contract is for $72 million with $40 million guaranteed. Golladay can earn up to $76 million through the deal, according to Ian Rapoport.

Golladay was one of the top free-agent receivers on the market. He only played in five games last season due to injuries. Golladay did have 65 catches for 1,190 yards and 11 touchdowns over 16 games in 2019.

Golladay revealed that third-year quarterback Daniel Jones was one of the people that reached out to him during the process. He also shared his thoughts on why he believes Jones is the right QB to join forces within his pursuit for success.

“He’s still kind of fresh in the league a little bit and I kind of want to grow with him. I’m still growing as a player and I feel like I and him can do some good things. We haven’t gotten on the practice field yet, but me and him both are very excited.”

Jones can now say he has a number one receiver target with the addition of Golladay.