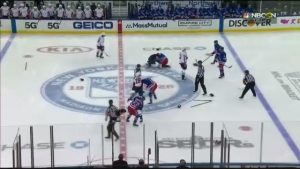 As soon as the puck hit the ice, the gloves hit the floor, and the New York Rangers and Washington Capitals exploded into a brawl.

ESPN reports the game had a combined 72 penalty minutes in the first four minutes of their game. There were six fights to start the game inside Madison Square Garden.

This was the second matchup between the two this week. Earlier in the week, Rangers star Artemi Panarin was injured by Washington forward Tom Wilson.

“I definitely think we felt the need to take matters into our own hands a bit,” Rangers center Ryan Strome said. “I thought it was a great response. And hats off to them for answering the bell. They knew our frustration. We solved it and played the rest of the game.”

You can see the brawl below.