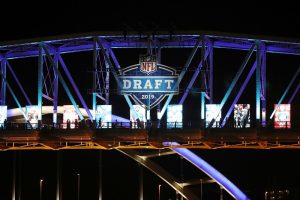 The NFL appears to be jumping on the Clubhouse wave. Starting Monday, the NFL will host a series of rooms on the live audio app featuring pre-draft player analysis, mock drafts, a conversation with University of Alabama alumni, and more.

The partnership is Clubhouse’s first with a major sports league. The company hired a head of sports partnerships, Sean Brown, earlier in April.

Clubhouse, recently valued at a reported $4 billion, is still invite-only and exclusive to iOS. The app has seen enormous growth since debuting in March 2020, tallying more than 10 million downloads.

Since Clubhouse hit the scene, Twitter, Facebook, Discord, LinkedIn, and Slack have all launched their own live audio products.

Last year’s “virtual draft” was the most watched NFL Draft ever, reaching more than 55 million viewers over three days. NFL and Clubhouse are banking that a great percentage of those fans find their way on to the app.

The post SOURCE SPORTS: NFL Is Partnering Up With Clubhouse For Draft Week Coverage appeared first on The Source.