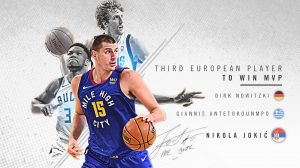 Denver Nuggets star Nikola Jokic was named the NBA MVP for the 2020-21 season on Tuesday.  Jokic is the first player in franchise history to collect the honor. He beat out Golden State Warriors star Stephen Curry and Philadelphia 76ers star Joel Embiid, who were the two other finalists.

“To be honest, I didn’t even think about being in the NBA,” Jokic said on TNT’s “Inside The NBA” after winning the award. “My goal when I started to play basketball back home was to play in the EuroLeague because that was the closest top league to my country. I could play in some big clubs in Serbia and grind my way up. But then the Denver Nuggets drafted me, and it was an opportunity for me to become an NBA player.”

Jokic finished the season with career-best averages of 26.4 points and 8.3 assists and tying a career-best by averaging 10.8 rebounds. Jokic also held down the Nuggets and kept them a top 3 seed in the Western Conference without All-Star guard Jamal Murray who was lost for the season with a torn ACL.

By winning the MVP award, Jokic finds himself lined up for a huge payday. Jokic is a year away from being eligible to sign a supermax contract.

If Jokic signs the supermax contract after next season, the deal is projected to be the largest in NBA history, according to Bobby Marks. Marks says the contract would be for five years at $241 million.

Jokic wasn’t an overnight success story. He put in the work and built his skillset from the ground up. Jokic is the first second-rounder in NBA history to win the MVP award. His journey and continuous work ethic should serve as motivation towards others.