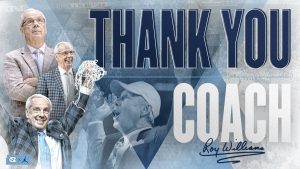 The iconic run of Roy Williams as head coach of the North Carolina Tar Heels has come to an end. ESPN reports sthe 70-year-old legend will conclude his 48-year coaching run during a news conference Thursday (Apr. 1).

The last 18 seasons of Williams’ career was spent at UNC, compiling a record of 485-163 and winning national titles in 2005, 2009, and 2017. Williams’ final game will be the first round loss to Wisconsin during this NCAA tournament.